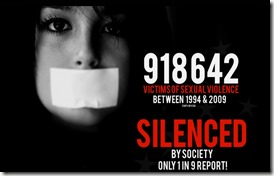 This weekend the Springboks play wales – Just the money spent on one rugby international test would be sufficient to financially support a rape crisis centre for one year.

What we forget, is that the true cost of rape is even greater than any money we can imagine – it destroys the fabric of our society and if we fail to act now, the cost we will bear will be disastrous – because the lives of our women, children and vulnerable people in South Africa will forever be changed – for the worst.

Speak out against Rape and Act now.

So who do we believe?

Here are some credible stats that will really shock you!

According to a study conducted The South African Medical Research Council and Gender links, only 1 in 25 women will report a rape to the police: not 1 in 9 , but one in twenty five rapes. That means that for every 4 rapes reported to the police, 100 rapes have taken place. Here are some more statistics, Statistics from the Eastern Cape: According to SAPS over a 7 year period, 2001 – 2007 there were 20 641 rapes reported in the Eastern Cape Province. For this period the average ratio per 100 000 people was 49.3. Now you may think, what is so significant about this statistic or ratio?

One centre ( Sinawa Centre) , saw such an increase of rape victims coming to them for help and counselling, that their stats increased to 417 per 100 000. That is 10 times higher than reported rape! So maybe 1 in 9 or 1 in 25 reported rape is a more accurate reflection of what is really happening on the ground.

And even these statistics may not be an accurate indicator of the true problem we face in South Africa and in the Eastern Cape! By the researchers own admission, rape is difficult to research, because victims of rape don’t want to talk about their ordeal. Many rape victims don t report to the police because they don’t speak about their rape. FULL STOP.

They don’t speak about the rape to their husbands or boyfriends, their BFF ( Best Friend).They don’t tell their parents or their families about the rape. Is it because their families, their husbands, or the police don’t care? Or.. Society for that matter? No – it is because the victim is feeling scared, guilty, ashamed, hurt, dirty and YES, most importantly because of the stigma attached to rape that the victims doesn’t feel safe enough to come out into the open and speak about their rape.

Yes, they don’t trust the police enough to listen sensitively and with compassion –

The stigma attached to rape is placed there by society. Because we don’t want to speak about rape. Rape is an unspeakable horror and so society creates this veil of secrecy that surrounds sexual violence and abuse and violence against women and children. It is human nature to keep quiet about unspeakable horrors. Trauma has a peculiar tendency to make people forget. In Psychology, we call this amnesia. In society, we call this denial.

The perpetrator attacks the character of the victim…How many times have we heard how victims are blamed for the clothes they wear, or how much alcohol they had.What is that saying? The victim is not a credible witness. And so when the victim makes a decision about whether or not to report their rape, they look at history and what has happened in the past, and they make their decision based on that. But its not all societies fault.

Rape is such a sensitive intimate subject because it deals with intimate, private parts of both the physical body and a woman’s internal emotional process. Think about it – most women don’t often discuss their own fantasies related to sex, their feelings and responses to physical touch on an intimate level with strangers, how much more difficult would it be for them to discuss such intimate parts of their lives when violated? And so, a rape survivor faces an uphill challenge both from society and from herself.

The way she sees the world has changed. She no longer feels safe. The way she sees herself has been changed – dramatically. She feels unsafe, uncertain and perhaps even unclean. And in this uncertainty, she must make a choice. She asks “Do I speak out and confront the attacker who even now continues to attack me in my dreams, in my sleep in my emotions and my thoughts…or do I forget. Deny. And try move on?” She may even ask herself, how can I find the courage to face my attacker and his gang of prosecutors and persecutors who will do anything to discredit me in court when I didn’t have the courage to fight him off when he raped me? How do I face a police officer and tell him what happened, when all I want to do is forget? How do I enter a doctors examination room willing to expose myself and feel as if whilst he is examining me, it is happening all over again? Being touched when I don’t want to be touched.

The problem of Rape has no easy solution. Rape has become a harsh and stark reality in South Africa, with one rape occurring every 23 seconds. Rape has become such an accepted everyday occurrence, that the rape of a child will not so much as raise a whimper of protest from the South African public, yet South Africans will mourn for months at the loss of a rugby game. Rape, to some men has become just that- a Game. RAPE is not a game, RAPE HURTS…and continues to hurt long after the committed crime, the degradation and shame continue.

According to Jane Raphael:

“Rape violates women in the innermost of their souls,

it is a pain that will stay with them forever.”

But there is a solution: Change begins with Society.

It begins with society fighting the belief that RAPE, to many a dirty word, is something that should not be spoken about. Society needs to collectively speak about and against RAPE. The solution begins with society asking the rape victim what they need. Offering them a safe haven to come forward and tell their story. It begins with us listening to the cry for help from the victim of rape.The centre I mentioned earlier, Sizanawa centre in Mthatha had an increase in rape survivors coming to them for help because they created an environment of safety and trust. The victims felt safe going to them for help. They were listened to. And because they were heard, they found healing.

Judith Herman, Associate Professor in Psychiatry at Harvard medical school and the author of Trauma and Recovery says that when survivors are able to speak out and tell the truth about what happened, they can begin their recovery. So if we truly want to battle the scourge of rape in our communities, we need to speak out and create an environment that is safe enough for rape survivors to be willing enough to come out.

So how do we do that?

Firstly, we research the issues surrounding responses to rape.

· Why are rapes not reported,

· What is the quality of forensic examination reports submitted to court

· How long do DNA results take to be released to court

· Determine how may forensic Social workers are available for therapeutic and forensic investigations.

And with the research results, campaign for change in the way Rape cases are managed within justice, policing and civil society environments. By identifying the challenges faced by rape victims, solutions can be identified and implemented – and such solutions will be effective because they are research based.

Advocate for change in the manner in which sexual offences are reported by the police when statistics are submitted. At present, due to the sexual offences act 2007 incidents such as pornography and sex work infringements are included in police reports which masks the true statistic of rape.

Develop and establish centre’s of hope whereby Rape Survivors can come to for help whether it be for legal assistance, counselling, support, therapy or even to undergo the sexual assault forensic examination in an environment that is safe, trustworthy and conducive to healing – surrounded by people, who may be survivors themselves but who are passionate about providing support to rape survivors.

Finally, and most importantly – Determine the cost of rape.

The study undergone at Sinawe Centre by the medical research council identified that the average cost per conviction was between R5000 and R10 000 per case. Invest more and we will see a higher conviction rate.Great financial Investment is needed in the field of support for rape survivors – remember the earlier comment about rape not being a game?

Well just think on this: the difference between investment in the sporting arena and the social services arena is vast.

This weekend the Springboks play wales – Just the money spent on one rugby international test would be sufficient to financially support a rape crisis centre for one year.

What we forget, is that the true cost of rape is even greater than any money we can imagine – it destroys the fabric of our society and if we fail to act now, the cost we will bear will be disastrous – because the lives of our women, children and vulnerable people in South Africa will forever be changed – for the worst.

Speak out against Rape and Act now.

Would you consider supporting the iThemba Rape & Trauma Support Centre on a monthly basis?